skip to main | skip to sidebar

It's Wednesday, so it's time to look at my two workbenches!

1) In the center is a little bird's nest I wire-wrapped to go with the cast branch from last week. I placed a white pearl egg in the center. 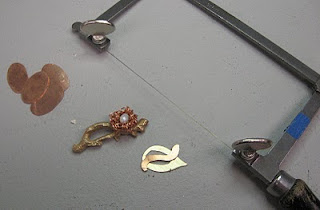 Oh! The trauma of trying to attach the thing on the branch!!!
First I cut out & shaped a small copper cup with holes around the sides to be the base. And then I drilled a hole in the branch for a wire to thread through the nest and into the branch. After that, I epoxied the nest on by placing a head pin through the nest and into the hole in the branch. It worked great!
Until I was half-way through wire wrapping the nest and had just attached the egg... Then the nest fell off because of the pressure I was putting it under as I pulled and tugged on the wire.
Arrgh. And then I couldn't hold onto the head-pin UNDERNEATH the pearl as I tried to reattach the nest... I got very frustrated. But I finally achieved success! It's on there. And I'm happy with it.

2) Below and to the right of the nest is a clasp I'm in the middle of creating to go with the branch & nest necklace.

3) Above and to the left are four ovals I'm working with.... I really don't know what they are going to be, but it is always wise to have at least 2 projects, if not more, going in the shop. Then if Jack can't help you immediately when you run into a problem on one project you can jump over to the other while you're waiting. Or you can pop something into the pickle while you work on something else.

This is my home table. 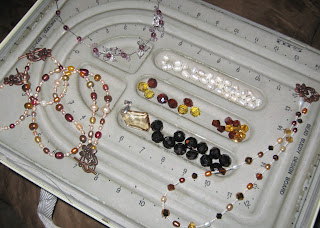 I've got three projects on there right now (Hmmmm.  I must like threes.):

1) In the upper left corner is the completed purple and crystal wire necklace I was half-way through last week. I thought I was done, but the middle flower is missing a crystal petal. I don't know when it happened, but I'm gonna have to fix it before I sell it this summer. I might as well get it done now rather than later. (Farmer's Market opens in 60 days!!!)

2) In the center wells I have spread out the crystals I'm going to use to create the fabulous dangle for the necklace on the right. I'm looking forward to this project! It has taken me a long time to pull together the different elements I wanted to use.

3) And on the far left I have finished the bracelets a customer asked me to make for her. They are to match two necklaces she bought over Christmas- one for herself and one for a friend. She also asked for some earring to match and I need to complete those before I can deliver her necklace and bracelets.

I would like you to make a necklace with the raven that my daughter saw at the market on Wed. Please email me. Nbod@hotmail.com

B and B
We ARE sisters! Beth got her first beads in sixth grade and has been in love with beadwork since then. (which means she's been doing beadwork a long time!) She is an artist- painter, writer, knitter, embroiderer... Rebecca has been working with beads for about five years. She is a musician, song-writer, poet, painter, and a serious reader. Both sisters love sci-fi and fantasy. ALL ITEMS ARE FOR SALE- To contact us just click on the comments line for one of the items. Please leave your email address for us or we won't be able to contact you! Your comments are directly emailed to us and we will respond promptly. We are also willing to do commission work if you have a special request.

check out our shop!